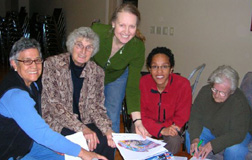 Planning for this co-op began soon after 1981 when The Harbroufront Corporation proposed that a co-op to be built on the west side of Bathurst Quay Park (now Little Norway Park). Lantana, a nonprofit housing resource group that had experience with church sponsored housing and facilities for people with disabilities, the Canadian Paraplegic Association, The Bathurst Co-ops Neighbourhood Committee of local citizens, an architect and a contractor came forward. Shirley Forde, who still lives at Windward, served on the planning committee addressing such considerations as soil contamination, schools, recreation, transportation, parking, and lighting.

Windward is the first fully-accessible co-op in Toronto. The facilities accommodate people with or without disabilities. people of all ages, incomes and ethnic backgrounds who live as a self-governing community. 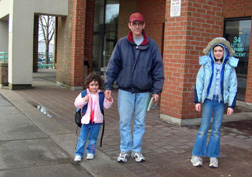 Before the residence was completed, members including Shirley Forde and Derek and Patty Smith went about town interviewing applicants. Cornelia Persich was one of the interviewees. She remembers the repeated delays, packing and than unpacking until she moved on January 1, ’87. Derek and Patty Smith and their sons age 8 and 12 delivered their furniture on December l, 1986 but had to live in temporary quarters until January. “It was like moving into a resort,” Patty said. “Our balcony looked out to the lake.” Most of the early residents mention the noise and confusion caused by so many construction workers. Lena DiCarlo’s bathroom flooded and she lived out of boxes for three months. Elina Carvillo, a widow, and her two daughters moved into Windward on a snowy New Year’s Day, 1987. She had come to Canada from Chile as a political refugee in 1975. “We could go to Italy, Sweden, Israel or Canada. I told my husband, I chose Canada. Amnesty International arranged everything.” Later, after her husband died, one of the architects suggested Windward. “There was no water or electricity. No panic,” she said smiling. “I had to go to Arcadia (Co-op) for water. I am happy here. I have everything, like people, good transportation.” 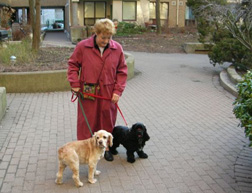 Doreen Albrecht of Windward takes Chelsey and Truffle for a walk.

Early residents describe the pot-luck dinners. Linda Thomas said her daughters, Amanda and Bridget Ward and Josie Wheatley called themselves “The Pussy Cats” and made up dance routines. Walter Augustowich talked about those parties and working together on committees. “People pulled together. We met volunteering and became friends.”

One man, who needs care-giver assistance, described how the truck delivered his furniture and his caregivers (employed by the forerunner of PACE, an organization funded through the Long Term Care Division of the provincial Ministry of Health) were on hand immediately.

Windward Co-operative Homes Inc. was developed under the National Housing Act of 1973 and amended in 1978 which provided direct Federal funding and loan guarantees though Canada Mortgage and Housing Corporation. At first CMHC guaranteed a mortgage loan from a bank, but presently CMHC holds the Windward mortgage and supplies grants. One stipulation is that units at Windward be available for people with disabilities and another is that Federal funds be applied as subsidies to low income families. The mortgage renewal formula is such that the amount of Federal money for subsidy diminishes as the mortgage is paid down and a new proposed formula will also mean less Federal money. To meet the funding shortfall, residents contribute to an internal subsidy pool. When finances permit, a family’s subsidy stops. Most households pay market rent which is based on budgetary requirements. 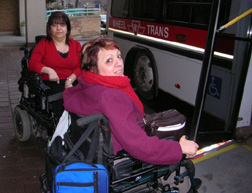 “Co-ops work. They are successful,” one long-term resident said. “Everyone chooses to live like good neighbours. There’s a community feeling, a little village in one building.” When asked to describe the co-op strengths and weaknesses he said,” A strength is that we are run by volunteers, ordinary people meeting the needs of people of diversity. A weakness is that ordinary people are running a multimillion dollar business. There are inefficiencies and mistakes. There has been a feeling of security. I feel at home, but now there is uncertainty about subsidy.”

In 1987 Windward was presented with an Accessibility Award by the Mayor, Art Eggleton. Since 1999 the co-op has won six Garden of Distinction Awards, one Flower award and one Newsletter Award, the work of two of the member committees. .

Rose Maretlli summed up the feeling shared by many residents. “People of different backgrounds have integrated to form a community. I feel at home.” Windward celebrates on May 26 from 2:00 to 4:00 p.m. A new generation of The Pussy Cats will perform.

We may request cookies to be set on your device. We use cookies to let us know when you visit our websites, how you interact with us, to enrich your user experience, and to customize your relationship with our website.

Click on the different category headings to find out more. You can also change some of your preferences. Note that blocking some types of cookies may impact your experience on our websites and the services we are able to offer.

These cookies are strictly necessary to provide you with services available through our website and to use some of its features.

Because these cookies are strictly necessary to deliver the website, refuseing them will have impact how our site functions. You always can block or delete cookies by changing your browser settings and force blocking all cookies on this website. But this will always prompt you to accept/refuse cookies when revisiting our site.

We fully respect if you want to refuse cookies but to avoid asking you again and again kindly allow us to store a cookie for that. You are free to opt out any time or opt in for other cookies to get a better experience. If you refuse cookies we will remove all set cookies in our domain.

We provide you with a list of stored cookies on your computer in our domain so you can check what we stored. Due to security reasons we are not able to show or modify cookies from other domains. You can check these in your browser security settings.

These cookies collect information that is used either in aggregate form to help us understand how our website is being used or how effective our marketing campaigns are, or to help us customize our website and application for you in order to enhance your experience.

If you do not want that we track your visit to our site you can disable tracking in your browser here:

We also use different external services like Google Webfonts, Google Maps, and external Video providers. Since these providers may collect personal data like your IP address we allow you to block them here. Please be aware that this might heavily reduce the functionality and appearance of our site. Changes will take effect once you reload the page.

The following cookies are also needed - You can choose if you want to allow them: